This years UK Corporate Games, http://www.corporate-games.com, was held in the City of Nottingham over the weekend 6-9th July, with the Badminton event held at the fantastic facilities at Nottingham University. The games consisted of 23 different sports including Basketball, Dragon Boat, Netball, and Volleyball to name a few, with a number of events being held at the Universities facilities and other venue around the city.

The Games which is likened to a mini Olympics, with 105 organisations, and thousands of competitors, battling it out in 23 different sports for medals and finishing points, to determine overall sports champions, divisional champions  and medalist champions.

Black Arrows fielding a team of 5 coaches, consisting of Anthony Henry, Amardeep Panesar, George Joseph, Harpour Williams and club founder and Chairman Henry T. Gaspard, competed in the Badminton event and in division 1 for teams of 1-5 Athletes. Following 3 days of competition, a few injuries and upsets, Black Arrows proved that despite their small team size, they were still regarded one of the top teams at the Games. Badminton was won by Lloyd’s Banking Group (Division 4, 21-50 Athletes) with 130 points, Vodafone UK Ltd (Division 8, 200+ Athletes), finished 2nd with 75 points, and Black Arrows 3rd with 46 points. Black Arrows also finished 2nd in Division 1, which was won by Kingston Technology Europe Co LLP with 51 points, and 34th  in the medal table with  a total of six medals, 2 first place, 1 second place and 3 third place medals. The Medalist Champions were Vodafone UK Ltd with 67 medals.

The Men’s 50+ singles was dominated by Black Arrows who recorded a 1, 2, 3, with Anthony Henry beating Harpour Williams in the finals and George Joseph finishing 3rd. The Men’s doubles 50+ was won by Anthony Henry & George Joseph, with Harpour & Henry finishing 3rd, Amardeep Panesar finished 3rd in the Ladies singles 40+, and 4th in the Mixed doubles 40+ with Henry.

Games Sport Patron, Helen Richardson-Walsh MBE, Olympic Gold Medalist, GB Women’s Hockey, was in attendance on Sunday to present medals to event winners. Harpour and Anthony took the opportunity to chat with Helen and take a photo with her with Olympic gold medal.

A tremendous achievement by a small team of players, who are already planning on entering a larger team for next year’s Games to be held in Stoke on Trent in June 2018. 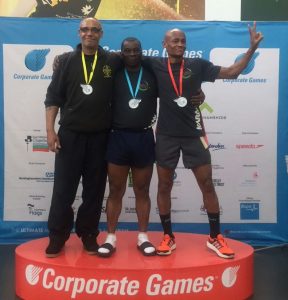 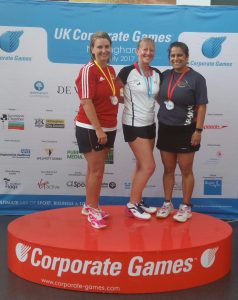 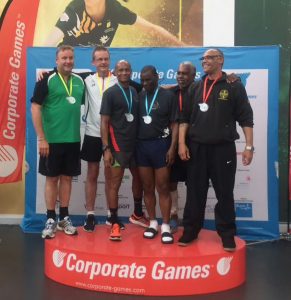 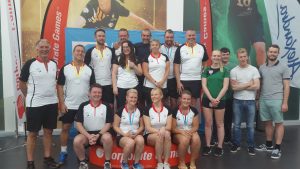