Members of Black Arrows Badminton club were again present at this year’s Corporate Games held over the weekend of 2-4th August 2019, held at Warwick University in Coventry.

Black Arrows also finished 2nd  in Division 1 for teams of 1-5 players, tied on 31 points with Jacob’s Engineering, who won the division by having one more 1st place medal than Black Arrows.

Ben also teamed up with team mate Ben Green in the Men’s Doubles Open category but did not qualify to the final  stages. Ben Green and Amardeep played in the Mixed Doubles Open Category, but unfortunately lost their qualification game which would have seen them through to the last 8.

Our last chance of another 1st place medal rested with George and Anthony in the Men’s Doubles 50+, an event they won at last year’s Games in Stoke-on-Trent. Having won the 1st game against Andrew Fernley & Steve Summer of Lloyd’s Banking Group, and 19-19 in the second game, injury struck with Anthony rupturing his right Achilles tendon, forcing the duo to concede defeat due to injury. Anthony was driven home back to London, where he received treatment for his injury, and will now be out of action for several months recovering, but determined to be match fit for the next year’s games in Lancaster, 23-26 July 2020. 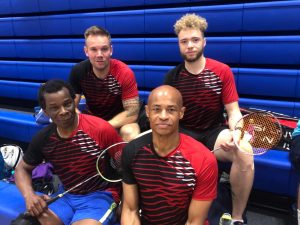 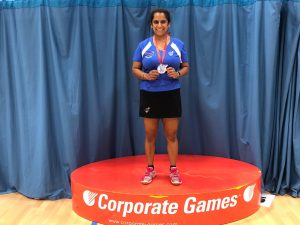