Sharon Barnes” GB Para-Badminton player, Black Arrows coach, sponsored by “KARAKAL Worldwide” reports on her recent achievements at the Scottish 4 Nations Para-Badminton Championships held in Glasgow in February.
As you can see from the results link, I entered the Wh W2 Men’s singles group playing against Martin Rooke GB’s top seed, and Gobi Ranganathan GB’s 2nd seed. I tried to set realistic goals in those games and was happy enough that I managed them, ie. at least 5 points from each game. These games were played on Saturday.
On Sunday, due to not many women players at this comp, I played a straight final in the Wh W2 Women’s singles. In the Wh Mixed, I played with Owen Kilburn for the first time against the proposed new top GB mixed pair in a straight final due to low number of mixed pairs. In the first game, we were finding our feet and lost 7, but then in the second game we lost 17. I really felt comfortable playing with him, and it was good to hear from his father that it was the first time he saw his son really relaxed and enjoying the mixed game in a long while!
In summary, I have lots of hard work and training to do to improve my game results, focus and mental attitude. I am however pleased to have come away from the championships with 2 silver medals, and the confidence that my game is improving ready for my next event in Spain in March. 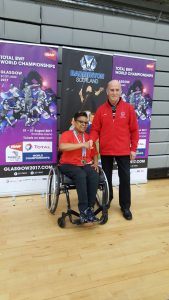 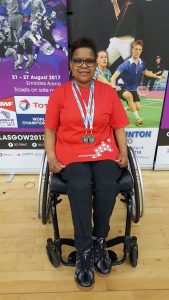 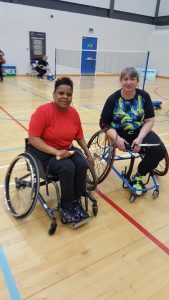