Club Chairman Henry T. Gaspard, says “Sharon has been a great ambassador for the sport of Badminton, and her achievements over such a short period of time has been remarkable.  She is an incredible fun, bubbly person, who as a player we have committed to support her in her pursuit to be the best that she can be in representing GB and in her tournament playing. As such we have managed to secure a sponsorship package with KARAKAL Worldwide limited, who will provide Sharon with her playing equipment and clothing.

Sharon’s story and achievement in Badminton is remarkable when you consider that she had only started playing in 2008, and in a very short space of time has risen to the top of her sport. Sharon in her own words tells her story.

” When I met Herman Fung (Badminton Coach), at the Stoke Mandeville National Inter-Spinal Unit Event in Feb 2008, at the time I had suffered a heart attack and was completely paralysed from head to toe due to a stroke in my spinal cord.  Also, my right leg is amputated and I am an Insulin dependent diabetic.  I never thought I would be able to play sports ever again, but Herman invited me to have a go at badminton.  He believed in me and helped me realise that I am able to believe in myself again, this bought me motivation and belief that I am able to compete in sports and hence winning several medals for my club and country during the past 7 years.  Another highlight was to be invited to partner Gobi Ranganathan, England’s number 1 in men’s wheelchair badminton in a few Mixed doubles events.

I am now partnering both England’s Martin Rooke in the mixed category, who is ranked number 1 in Europe, together with England’s number 1, Paula Robinson in the ladies doubles category.

Since then, we have been receiving great help from the local Disability Sport Officer and were being invited to demonstrate wheelchair badminton during the Paralympics Flag handover event, having the great opportunity of meeting the Mayor of Hackney.  I have since been invited to deliver talks in schools and community events about my story in accepting my disabilities.  Initially, I obtained my Level 1 Badminton Coach qualification through Badminton England and have now passed my Level 2 assessment, making me a Qualified Badminton Coach.  I have now set up the Hackney Mix-ability Badminton Academy with Herman.  I endeavour to continue to compete for Hackney and England, and coach and reach out and inspire more people from all walks of life.

I have been a coach for the Hackney 50+ badminton team for nearly 4 years.  They have competed at the Annual Club Games held in Brixton.  This is held annually, and the team competes against a number of the London boroughs.

I also prepared and managed a successful mini badminton tournament in 2013 with the 50+ badminton teams from the Olympic & Paralympic host boroughs, Waltham Forest, Tower Hamlets and Hackney which took place at the Copper Box.

Also, I had one of the greatest opportunities of my life to carry the Paralympic Torch in August 2012, in the community of Hackney.  It was absolutely amazing!

With regard to my training regimes, being a diabetic and having heart problems, Herman, Jeanette Ash, who is my personal trainer and coaching assistant, and Tom Chui who is also currently assisting with my coaching have exercised extra care and understanding towards my special needs and were able to draw up appropriate training programmes for me in adapting    my disability needs.  They continue to encourage me to work closely with my physiotherapist and stretch my ability to the fullest.

Recently in June 2014, I was part of the Team England squad to compete in England’s first international championship against some of the best in the world ie, Korea, Malaysia, Holland, Scotland, Israel, Russia, and India being just some of the countries taking part. I came away with a silver medal in the ladies singles, and a bronze medal in the ladies doubles, this has been the best I’ve done in my international career. I was also featured on the BWF (Badminton World Federation) news page.

In November 2015, I was asked by Kings Hall Leisure Centre to represent Hackney Borough to coach mixed pairs to compete in the badminton tournament at the Better Annual Sports Event (GLL) against 19 other boroughs in London. It was one of the best results in my coaching career. We reached the final in the first time ever of the annual competition.

I continue to train with Black Arrows and I am extremely grateful to Henry and Amardeep Panesar, for the help and support they have given me in securing sponsorship with KARAKAL Worldwide Ltd, and the continued support they and the other coaches provide for my training  training and coaching”. 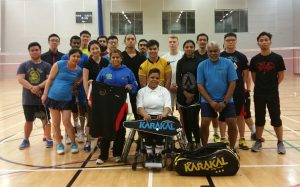